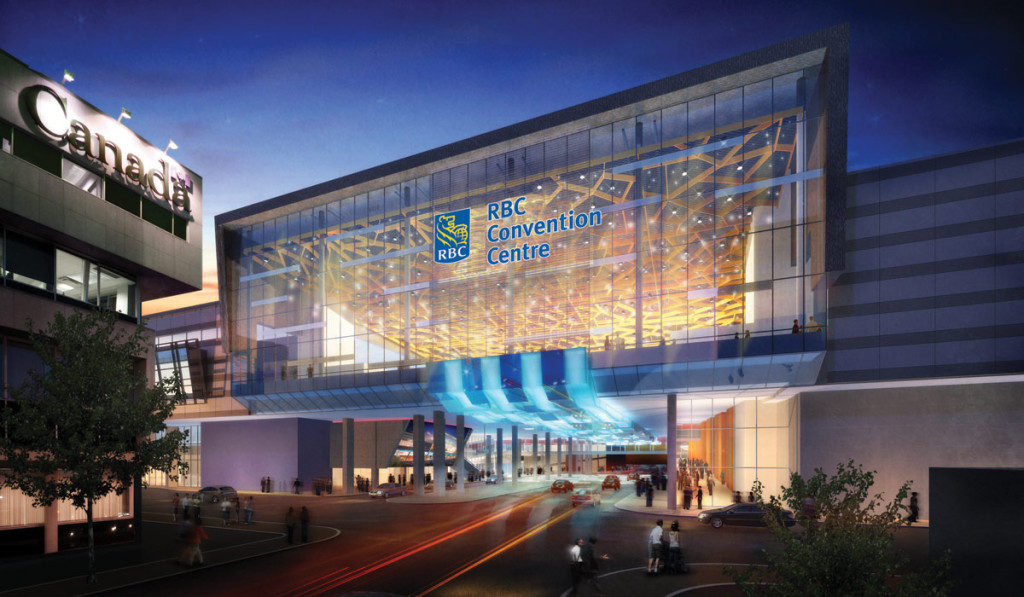 [Winnipeg, MB] – July 2, 2013 – The Winnipeg Convention Centre will now be known as the RBC Convention Centre Winnipeg, thanks to a naming rights partnership agreement between the Convention Centre and RBC Royal Bank. As construction begins on the empty parking lot on York Avenue, today’s announcement is another chapter in the over $180+million expansion and renovation project.

Present at the announcement were Manitoba Premier Greg Selinger, the MP for Winnipeg South Centre, Joyce Bateman, and Winnipeg Mayor Sam Katz, who all heralded the importance and significance of this announcement and expansion project.

“Manitoba continues to solidify its presence as an important economic and cultural centre through facilities such as the RBC Convention Centre Winnipeg which brings local, national and international visitors to our Province,” said Premier Selinger. “The expansion of the Convention Centre is another long-term important step to supporting the renewed energy that is revitalizing downtown Winnipeg; helping Winnipeg and all of Manitoba thrive. This project will ensure Winnipeg’s economy remains strong and attract events that will benefit Manitobans in the years to come.”

“The Winnipeg Convention Centre is very excited to partner with RBC on this milestone occasion,” said Klaus Lahr, President and CEO, RBC Convention Centre Winnipeg. “We are thrilled to have their name attached to our convention centre for years to come. RBC has played a significant role in the history of our country and having their support is monumental. This agreement is a further sign of the significance of our expansion as we continue to remain competitive in the Canadian convention industry and reposition ourselves in the community.”

“We at RBC are proud to share our brand with one of Winnipeg’s most iconic meeting places,” says RBC Regional President Rob Johnston. “We join Winnipeggers in welcoming the world to our province and all that our city and the growing RBC Convention Centre Winnipeg have to offer.”

“Today, work begins to modernize one of Winnipeg’s downtown landmarks,” said MP Bateman. “Our Government is proud to invest in this project which will create local jobs and contribute to the local economy. I am also glad to see the new RBC Convention Centre Winnipeg receiving important private sector financial support through today’s partnership announcement.”

“The Convention Centre is an important anchor for Winnipeg’s Sports, Hospitality, and Entertainment District,” said Mayor Katz. “This partnership agreement is exciting for our City. I am pleased to see the work begin on the expansion of the Convention Centre, which will create a wonderful and vibrant welcoming place for both Winnipeggers and visitors to our city, as well as showcase our downtown.”

With the expansion and renovation, the RBC Convention Centre Winnipeg will double in size and extend south over York Avenue. The new facility will include multi-purpose divisible space, additional underground parking and main floor public assembly space. The third floor will feature new exhibit space that will connect to the existing building and create over 135,000 sq. ft. of contiguous, pillarless trade and consumer show space. A highlight on the third floor will be the impressive City Room which will be located above York Avenue with full windows on the east and west sides. Below on street level, York Avenue will function as a new downtown weather protected gathering place.

Funding for this project was announced on June 25, 2012. Its total cost is estimated to be over $181 million. Federal funding for this project comes from the Building Canada Fund – Major Infrastructure Component, under which the Government of Canada is setting aside up to one-third of total eligible costs, to a maximum federal contribution of $46,646,667. The Province of Manitoba and City of Winnipeg are each contributing up to $51 million. The balance of funding will come from new incremental property tax revenues from an integrated hotel and commercial development adjacent to the RBC Convention Centre Winnipeg, as well as additional revenue generated by the RBC Convention Centre Winnipeg.