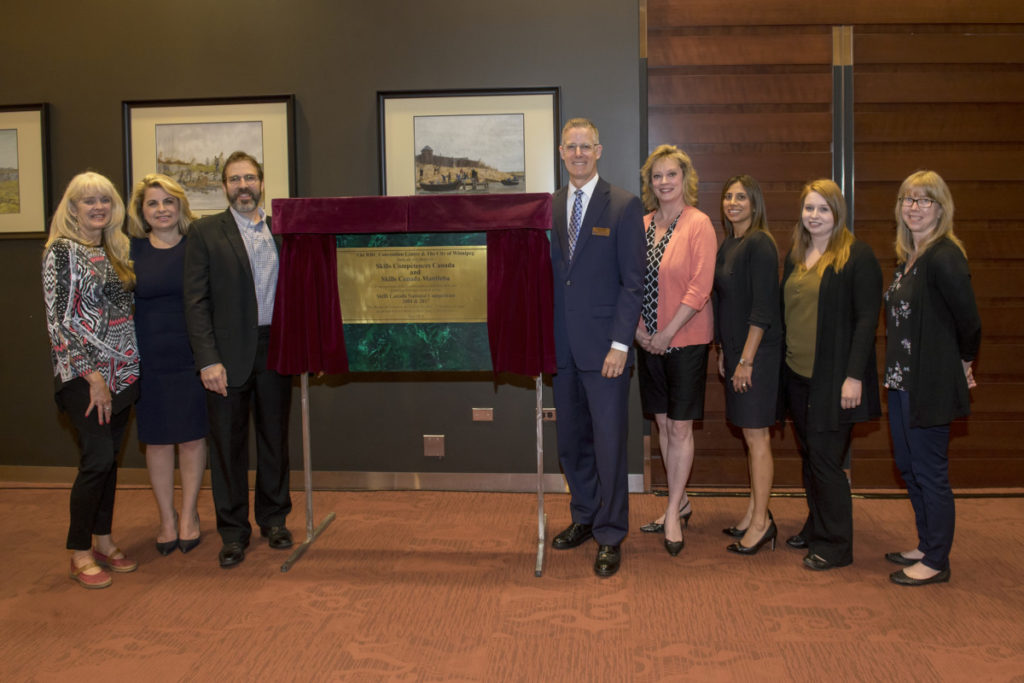 In recognition of their outstanding contributions to the planning and organization of two Skills Canada National Competitions, the RBC Convention Centre recognized Skills Compétences Canada and Skills Canada Manitoba with the induction into its prestigious Ambassador Plaque Program.

At a reception on June 11, the 36th Ambassador Plaque was unveiled and will join a group of highly distinguished associations and organizations on the Centre’s Wall of Fame, located just inside the York Avenue entrance of the north building.

The RBC Convention Centre, in conjunction with the City of Winnipeg, started the Ambassador Plaque Program in September 1994 to recognize those individuals and groups whose efforts have been integral to bringing conventions and other events to our city. These people, some of whom volunteer their time and services, have a tremendous impact on our city on both a social and economic level.

In 2004, Skills Manitoba hosted the Skills Canada National Competition in Winnipeg for the first time. With its tremendous success as a host city, they were anxious to bid on the event again. But with the growth of the competition, Winnipeg had to wait until the convention centre expansion was complete.

“We were proud to have the opportunity to host their national competition again,” said Drew Fisher, president and CEO, RBC Convention Centre. “With our newly expanded facility, we now had the space to accommodate their growing needs. Literally every inch of our building was used – from the loading docks to our plaza on York Avenue. We even closed down the street for the first time ever in order to host their opening reception. What a street party that was!”

“Thanks to the collective efforts of Maria Pacella, Executive Director of Skills Canada Manitoba and executive member Penny McMillan, they became the local champions who helped secure the 2017 national competition that brought 550 competitors in 43 skilled trade competition areas from all 10 provinces and three territories to Winnipeg. Thanks to their efforts and those of the entire host committee, the event was a huge success.  We understand there were more than 10,000 attendees, making 2017 the best attended Skills Canada competition ever,” Fisher added.

The Skills Canada National Competition is the only national multi-trade and technology competition for students and apprentices in Canada. In addition to the competition, there is a trade show, a comprehensive series of “try a trade” and technology areas, celebrity events, meetings and a forum on essential skills that are an integral part of any job.

Hosting the national competition not only benefits the city from an economic tourism perspective, but also provided hands-on work experience related to trades and technology and raises awareness about career opportunities for participants.