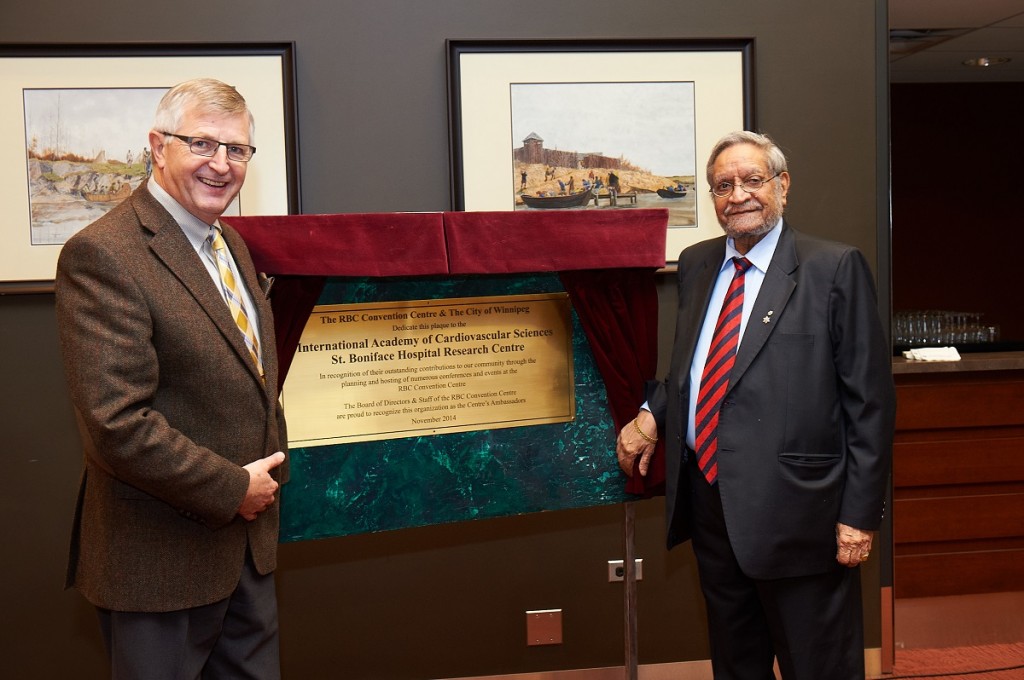 The Ambassador Plaque Wall of Fame on the main floor of the RBC Convention Centre has a new addition.

On November 18, 2014, Klaus Lahr, President & CEO of the RBC Convention Centre presented the 32nd Ambassador Plaque to the International Academy of Cardiovascular Sciences.

The dedication of this plaque is in recognition of their outstanding contributions to the planning and organization of numerous conferences and events at the RBC Convention Centre and joins a group of highly distinguished associations on the Centre’s Wall of Fame.

The International Academy of Cardiovascular Sciences was founded in 1996 and is headquartered in Winnipeg at the St. Boniface Hospital Research Centre. Established by renowned Cardiovascular Scientists, Surgeons and Cardiologists, the IACS provides the organizational structure for the world-wide sharing of research and education information in the field of heart health and recognizes major cardiovascular achievement throughout the world.

Accepting the Ambassador Plaque was Dr. Naranjan Dhalla, CEO, IACS.  “RBC Convention Centre Winnipeg is a flagship for promoting economic, social, cultural and scientific activities,” said Dr. Dhalla.  “With the Convention Centre expansion, under the inspired leadership of Klaus Lahr, this place will undoubtedly make Winnipeg one of the major centres for encouraging trade, industry and science in North America.”

“We are always pleased to work with Dr. Dhalla and his team,” said Lahr.  “Dr. Dhalla has always been a strong supporter of the Convention Centre and continues to use his influence to bring international conferences and conventions to Winnipeg. His latest was the 2nd Cardiovascular Forum for Promoting Centres of Excellence and Young Investigators in September which attracted delegates from 15 visiting countries. Thank you to Dr. Dhalla for promoting Winnipeg and continuing to “Bring it Home”.