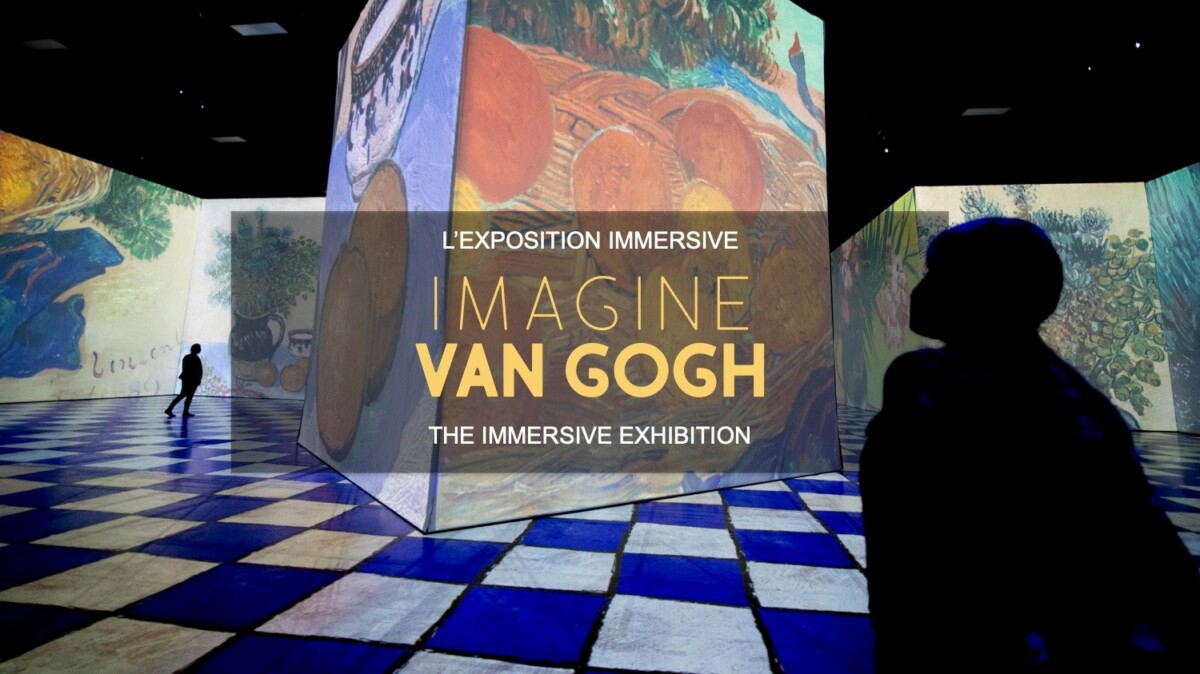 Following the new public health regulations which came into effect November 12, Imagine Van Gogh has temporarily closed their exhibition until further notice. Continue to visit their website https://winnipeg.imagine-vangogh.ca for information.

Imagine Van Gogh, the immersive exhibition from Europe featuring more than 200 of the Dutch artist’s paintings is at the the RBC Convention Centre in Winnipeg until the end of November following two wildly successful stops in Montreal and Quebec City.

Created by French Artistic Directors Annabelle Mauger and Julien Baron, known for their immersive exhibits Cathédrale d’Images in Les Baux-de-Provence, Imagine Van Gogh was presented first by Encore Productions in France, where it amazed audiences with the immersive concept of Totale Images; the viewer is literally transported on a journey to the heart of the artist’s work. The exhibit brings Van Gogh’s canvases to life in a vivid, spectacular way: “Original canvasses are expanded and fragmented, then projected into unusual shapes to emphasize the mesmerizing exaggerations and distortions of Van Gogh’s work. Visitors experience their energy, emotion, and beauty like never before.” says Annabelle Mauger.

During its first Canadian stops in Montreal and Quebec City, Imagine Van Gogh received widespread praise. Before closing in March, the stop in Montreal received close to 200,000 visitors. The presentation currently underway in Quebec City has already attracted more than 55,000 people to purchase tickets in just four short weeks and has already been extended due to high demand despite limitations around COVID-19.

Paquin Entertainment Group and Tandem Expositions, in agreement with Encore Productions (France) are excited to bring this spectacular production to Winnipeg for the very first time. Like Montreal and Quebec City before it, the Winnipeg show is sure to be a massive success and the highlight of the Fall arts season on the Prairies.

The health of our guests, staff, and community remains our highest priority. The exhibition is a contactless experience, taking place over 25,000 square feet in Hall D. A limited number of guests will be allowed in at all times, hand sanitizer will be provided, physical distancing of two meters will be required, and masks will be mandatory upon entering Hall D.

Visit https://winnipeg.imagine-vangogh.ca/ for more information and to purchase tickets.

Pascale Bernardin – Encore Productions – After promoting and working with some of the biggest Artists (Bob Marley, The Police, Michael Jackson, The Rolling Stones, Madonna, Supertramp, Sting), Pascal Bernardin created Encore Productions in 1987 to start bringing Family shows to his markets (Disney on Ice, Mamma Mia, The Walking Dinosaurs) and was very successful for more than 10 years. Encore Productions is known in France and across Europe for bringing the most successful International Expositions such as The Titanic, The Art of The Brick, Jurassic World, Game of Thrones, and Harry Potter to name a few. The success of these expositions is due to the subjects, artists, partners, and the quality of production which brings the audience a unique and memorable experience.

Tandem Expositions – Paul Dupont-Hébert who is President of Tandem Expositions is no stranger to the Quebec Cultural Scene. Friend and Agent of Francis Cabrel for more than 40 years, he has produced many musicals in Quebec, including the world-acclaimed musical Notre Dame de Paris. He is also behind the success of Imagine Van Gogh in Montreal and Quebec City. After the success of these markets he is looking forward to bringing the exhibition across Canada and internationally.