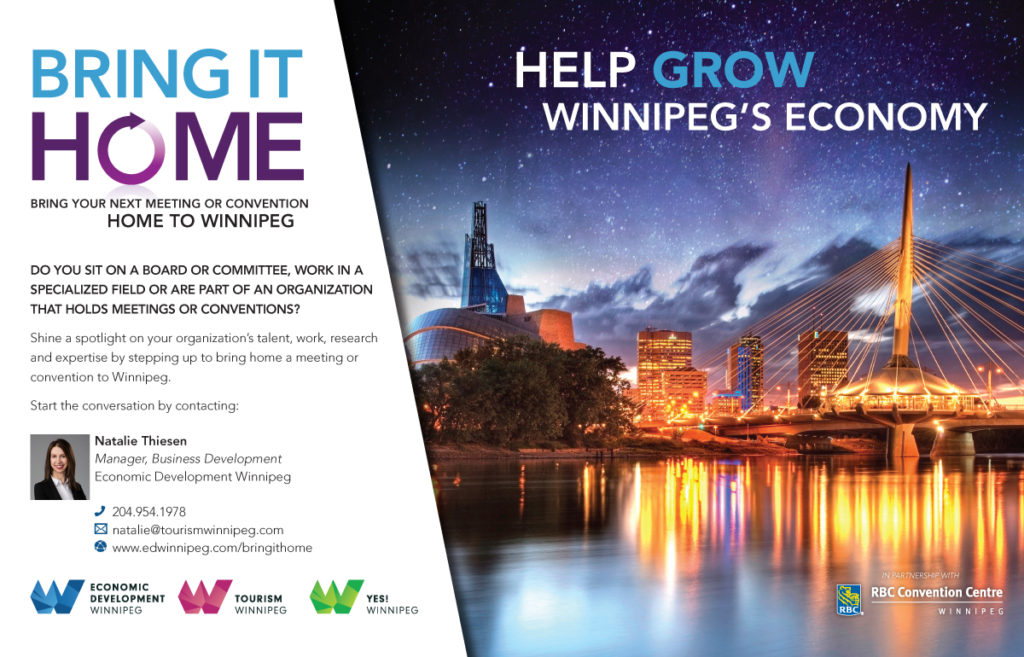 Bring it Home to Winnipeg

There is no better time to host a convention in Winnipeg. With several world-class attractions now open, new hotels, a thriving culinary scene, the expanded RBC Convention Centre, a vibrant arts and culture scene — Winnipeg is becoming an alluring, one-of-a-kind destination for visitors and delegates and the perfect time to Bring it Home.

The RBC Convention Centre works closely with Tourism Winnipeg and Economic Development Winnipeg to target and work with board members, convention delegates and those who work in specialized fields of research who are proud of Winnipeg, and ready to make a difference in the community.

“The Bring it Home program is designed to help Winnipeg leaders promote our city and bring meetings and conventions home. We have the resources and tools to work with them every step of the way and we make it easy,” said Natalie Thiesen, Economic Development Winnipeg’s manager of business development, who spearheads the Bring it Home program.

Thiesen said she sees great potential in the program which has helped attract nearly 100 meetings to date and over 37,000 delegates.

“The great thing about working with local business leaders and board members is seeing the energy and desire these people have to show off their city. We’re a people city, this is a great chance to leverage connections and make a difference by hosting a meeting or convention.”

Offering Assistance from start to finish

Currently there are over 60 locals that are working with the Bring it Home program to bring their events to Winnipeg from 2017 to 2023.  Tourism Winnipeg assists them from start to finish from the initial bid to eventually hosting a successful convention in Winnipeg.

Winnipeg reaps the economic rewards every time a convention is held in our city with delegates spending on everything from hotels to dining, transportation, retail shopping, arts and entertainment. Since its inception, the Bring it Home program has contributed in excess of $ 41 million in direct spending within the city.

There is no better time to host a convention in Winnipeg and with the Bring it Home program, it’s never been easier.