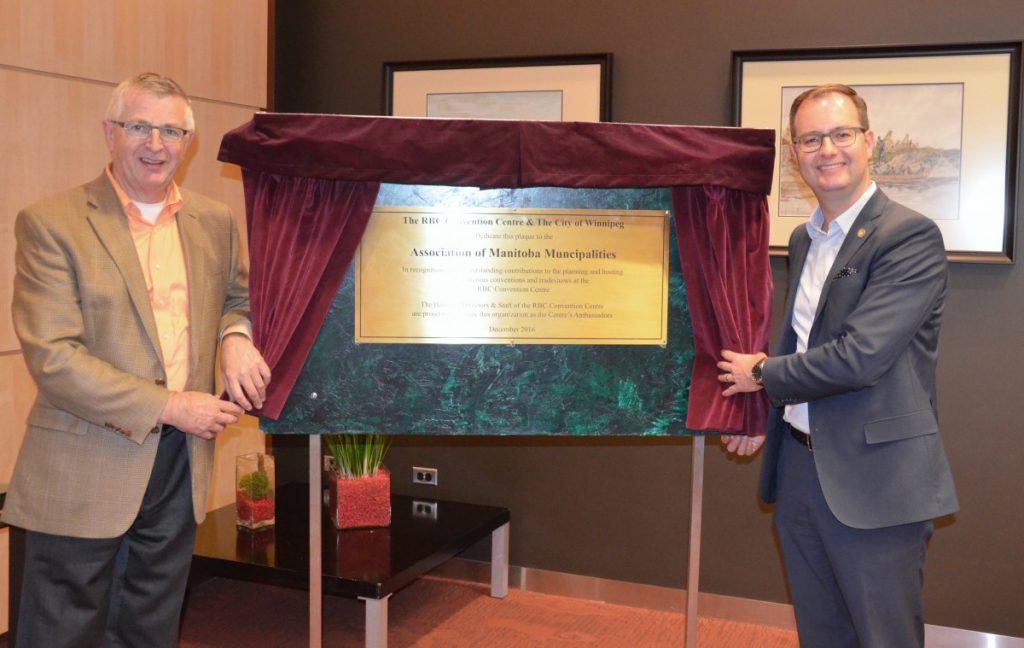 Association of Manitoba Municipalities Acknowledged for Outstanding Contribution to Winnipeg

December 2, 2016 — At a plaque presentation today, the RBC Convention Centre Winnipeg honoured the Association of Manitoba Municipalities (AMM) with induction into its prestigious Ambassador Plaque program.

In recognition of their outstanding contributions to the planning and hosting of numerous conventions and trade shows at the RBC Convention Centre, the AMM became the 34th organization to join a group of highly distinguished associations on the Centre’s Wall of Fame, located just inside the York Avenue entrance of the north building.

“The Association of Manitoba Municipalities (AMM) has been bringing its events to the RBC Convention Centre for close to two decades. The responsiveness and flexibility of the management and staff play a key role in helping make our events a success,” said Chris Goertzen, President, AMM. “The newly expanded RBC Convention Centre is a pleasure to visit and it is a great honour to know our name will permanently be a part of it.”

“It’s always a pleasure to work with the team from AMM and host their annual events,” said Klaus Lahr, President and CEO, RBC Convention Centre. “Whether it’s their conventions, seminars or tradeshows, the AMM brings hundreds of delegates from around the Province to downtown Winnipeg.”

The AMM was created in January 1999 as a result of a merger between the Union of Manitoba Municipalities and the Manitoba Association of Urban Municipalities. Representing all of Manitoba’s 137 incorporated municipalities, including the City of Winnipeg, the AMM’s mission is to identify and address the needs and concerns of its members to achieve strong and effective municipal government.