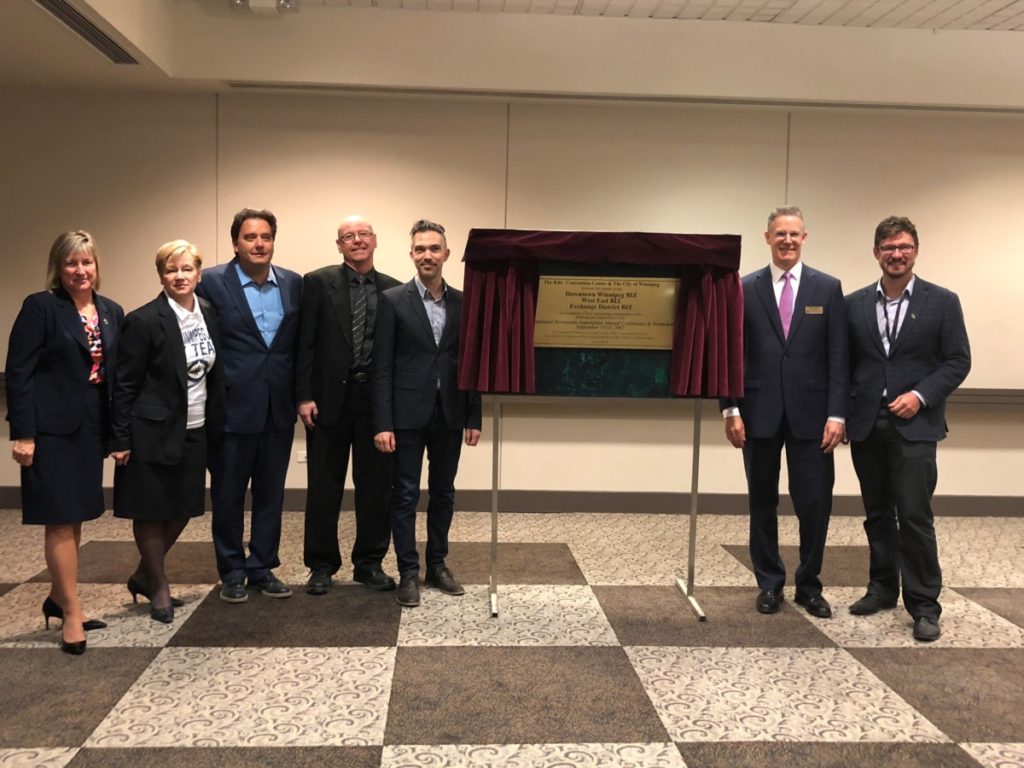 DOWNTOWN BIZ, EXCHANGE BIZ AND WEST END BIZ HONOURED FOR THEIR OUTSTANDING CONTRIBUTION TO THE COMMUNITY

In recognition of their outstanding contributions to the planning and organization of the International Downtown Association Annual Conference and Tradeshow in September 2017, the RBC Convention Centre acknowledged the Downtown Biz, Exchange Biz and West End Biz with the induction into its prestigious Ambassador Plaque Program.

At a reception on April 20th, the 35th Ambassador Plaque was unveiled and has joined a group of highly distinguished associations and organizations on the Centre’s Wall of Fame, located just inside the York Avenue entrance of the north building.

The Ambassador Plaque Program was initiated in 1994 to recognize those individuals and groups whose efforts have been integral to bringing conventions and events to our city. These people, many of whom volunteer their time and services, have a tremendous impact on this community, on both a social and economic level, as well as on the City of Winnipeg and the Convention Centre.

“The Ambassador Plaque Program is all about recognition,” said Drew Fisher, President and CEO, RBC Convention Centre. “It’s important that we take the time to recognize the work done on behalf of one’s local community that allows it to grow, prosper, celebrate and take pride in its achievements. We understand what it takes to make a conference like this happen. Initial conversations with Stefano Grande from the Downtown Biz dates back to 2010 and it was because of his influence at the Board and Executive level, that he was able to ‘Bring it Home’”.

The Convention Centre works closely with Tourism Winnipeg and Economic Development Winnipeg and its “Bring it Home” program which is designed to help Winnipeg leaders promote the city and bring meetings and conventions home.  The meeting and convention business is Canada’s quiet economic giant that generates billions of dollars every year in diversified economic impacts.

“When a convention delegate is visiting out city, they spend approximately $325 per day. From accommodations, food, entertainment, supply and transportation, their spending ends up practically everywhere in the local economy,” Fisher adds. “With Winnipeg attracting larger conventions and trade shows that may have never considered our city as an option before, that is good news for everyone.”

The International Downtown Association is the premier organization for urban place professionals who are shaping and activating dynamic city centre districts which represents an industry of more than 2,500 place management organizations throughout North America and growing rapidly around the world.